Welcome to the first content of the blog! it’s a tutorial by friend Benni Krause who’s been active on the facebookpage page and has been contributing to the comunity, posting for feedback and interacting with other people. As he got really good in the latest months, I asked him to write a “making of” of his latest work called “Conference room”. So here we go, have a nice reading and don’t forget to share comments and ideas, or even questions!

“Hello guys, this is Benni from Germany.

Today I want to give you some insight into my scene “Conference Room”.
My aim was to create a scene which was slightly illuminated by both, a beamer presentation and subtle lights in the room. 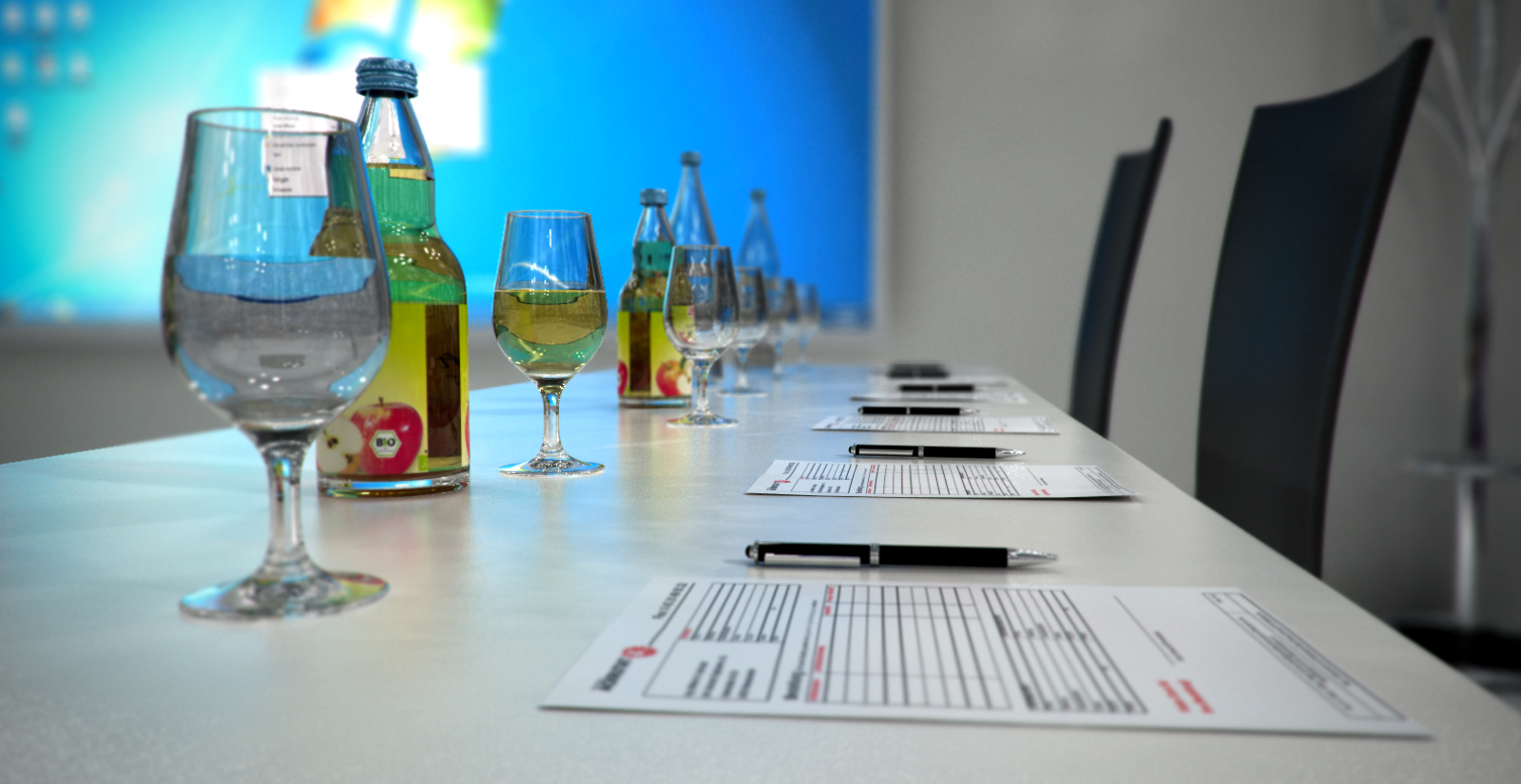 Setting up the scene

I was only modelling the visible parts in the scene, so don’t worry why there are parts missing.
After finishing modelling, I first created a rectangular light (1).
This was later supposed to be my beamer projection.
So I gave it the texture of a Windows Desktop. 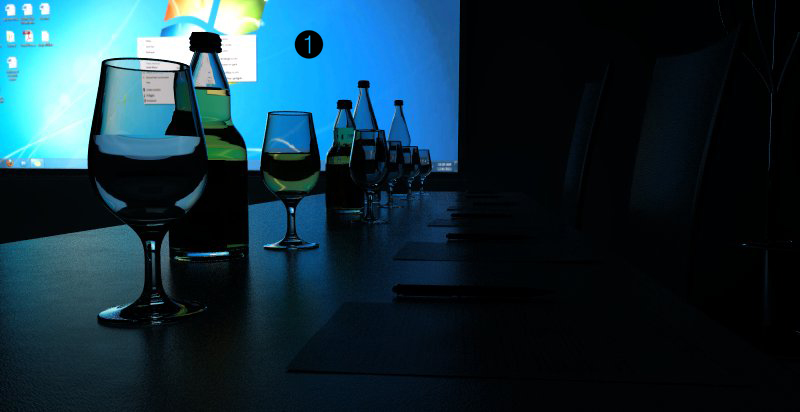 Although it looks pretty cool so far, there is still a lot things missing.
So first of all, to get some nice reflections on the glass, I created and duplicated some small lights (rectangular lights in groups of four) on the roof (1) and tried to get a good amount of brightness compared to the projection. I ended up setting the lights to an intensity of 100. (2) I didnt change the color, because the lights are supposed to be some halogen lights, which are always pretty cold. So simple white will work for this.
It is important to not activate the “Invisible” checkbox. Otherwise they will still illuminate the scene though, but not be visible in your reflections anymore. There are situations you dont want to see a light, but in this case I need them to be visible. The “Decay” checkbox would make them a “laser” with straight rays, but I dont want this as well. So I am happy with this right now. 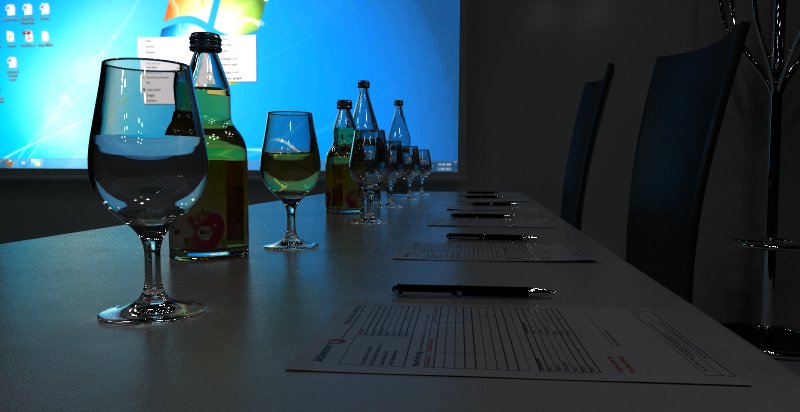 In order to get some more reflections in the drinking glasses and bottles I created some sort of Global Illumination. There are different ways to do so, the easiest one is to set it up directly in the Options/Environment (1). But in this case I am actually looking for something where I am able to manipulate the reflections a bit more differently. So I simply created a sphere around the whole Scene. (2) Now I created a material with nothing on it but an emissive layer (3). As texture I picked an HDR image of a warehouse, which gave me the amount of things happening in the reflections I was looking for(4). Nothing of this image will actually be seen in the scene so don’t worry it is not a picture of an actual conference room. I chose a multiplier of 10 for the intensity (5). Make sure you brighten or darken the material by the value of the multiplier and NOT by the one next to the mapping (6). Otherwise your lights and shadows of the picture may clip. Although it seems to be clipping on my preview as well, this is just because the preview is brighter than the camera settings of my scene.
This also helped me to get a more even illumination to the whole scene. 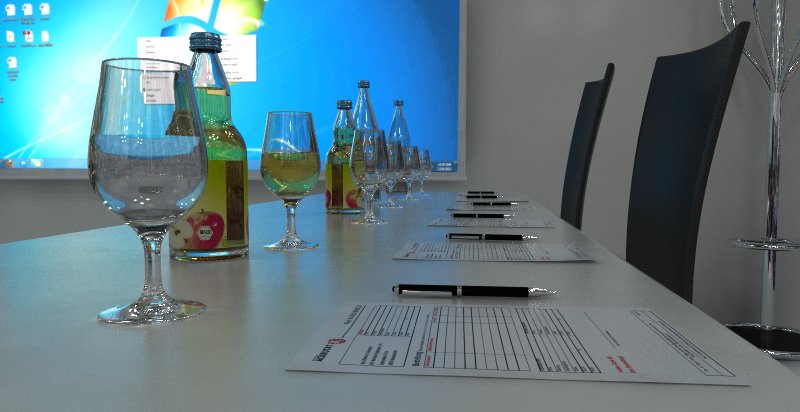 This already is pretty close to what I was looking for, but I want some more shadows of the glasses and bottles on the table. So I created some additional spotlight which I set up especially to where I want the shadows (1). In order to get a more random light/shadow situation I chose different amounts of intensity (2) and shadow radius (3).

As you can see the surface of the table looks a bit smudged.
An important parameter to realism is, to create some irregularity and imperfection.
Some of this can be fixed in postproduction, but not all of them.
So in order to get an imperfect “used” table surface, I mapped a b/w concrete texture to the Hilight and Reflect channel (1), which got affected by the standard fresnel shader (2), which I put on an intensity of 40%/0.4.
This means the bright parts of the texture will reflect more than the dark parts of my material, although the diffuse is still a homogeneous color. You can use this technique whenever you have unclean surfaces, or parts of the texture are supposed to reflect more than others, for example a wooden floor. To round this a bit off I created a second reflection layer without any textures (3). 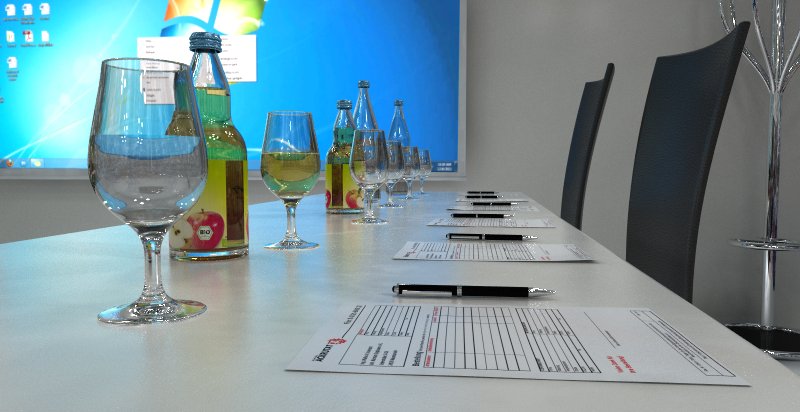 Last thing I needed to do was setting up a depth of field. Although Vray offers his own way to render a depth of field, it is recommended to chose an external method using a ZDepth channel. Advantages are, that it is a lot faster and you can set the focus point and also the strength of the blur afterwards using Photoshop.
So in order to tell Photoshop the exact distance of every part in our scene, go to Options / VFB Channels and activate ZDepth by clicking on it (1). Below you can set up the distance points for total white (very close) to black (very far) (2). You have to to some testing in order to get the right values for your scene. You should try to get as close as possible to pure white / black by not clipping it, so it looks like in the picture bellow.

Now it’s time for the final render. In most cases a resolution of between 1k and 2k should fit our requirements.
If it’s too big some details may appear unrealistic and the size gets redundant for online purposes (and as well the render time). So I decided to take a width of 1600 px and a height of 412, which was calculated in proportion to my Rhino perspective window. As illumination processes I chose Irradiance Map for the primary bounces (which is pretty common) (1).  and Brute Force for the secondary bounces (2)(Light cache is also working pretty well). You can go really high in Brute Force parameters, it doesn’t affect render time that much. I went for 128 subdivisions and 5 bounces (3). I also activated Caustics in the Vray Options (4). This gives you a splitting of the white light into the rainbow colors, as it is usual for refractions through glass. This may take some more rendertime, but due to the big amount of glass I used it makes sense, to get some more realism to the scene.

Watch out to safe both, RGB image and ZDepth channel after rendering. I recommend .tiff format. 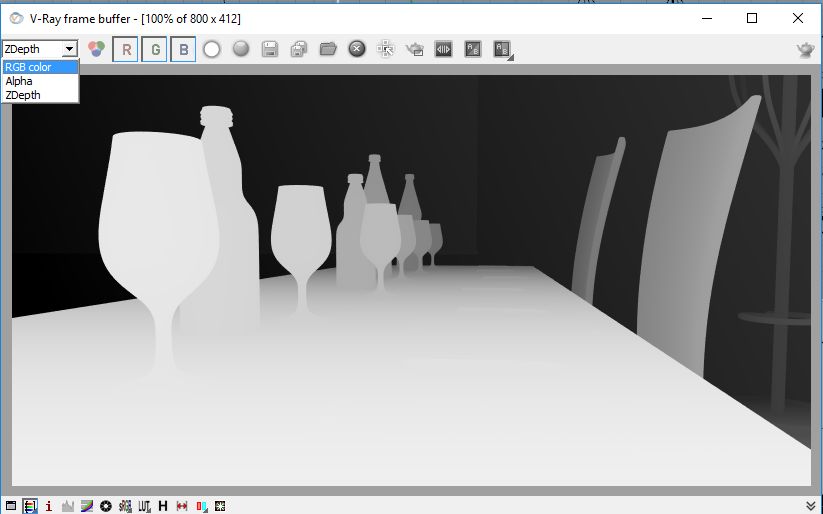 Open Photoshop. Load the RGB image and switch to channels (1). Create a new layer and paste your ZDepth image into it (2). 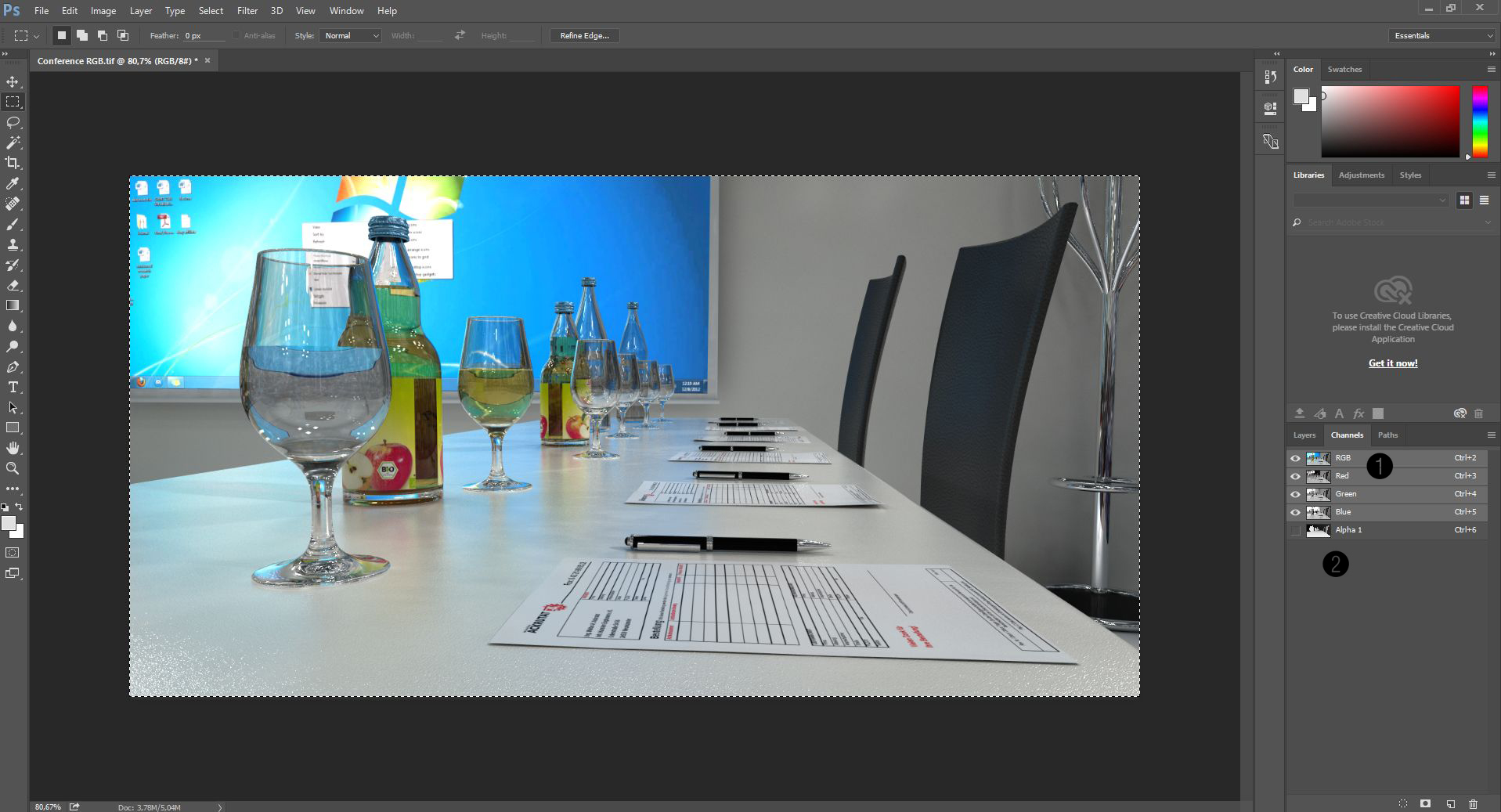 Now reswitch to layers or activate the RGB channel.
Go to Filter/ Blur/ Lens Blur.
Select your Alpha with the ZDepth (1). 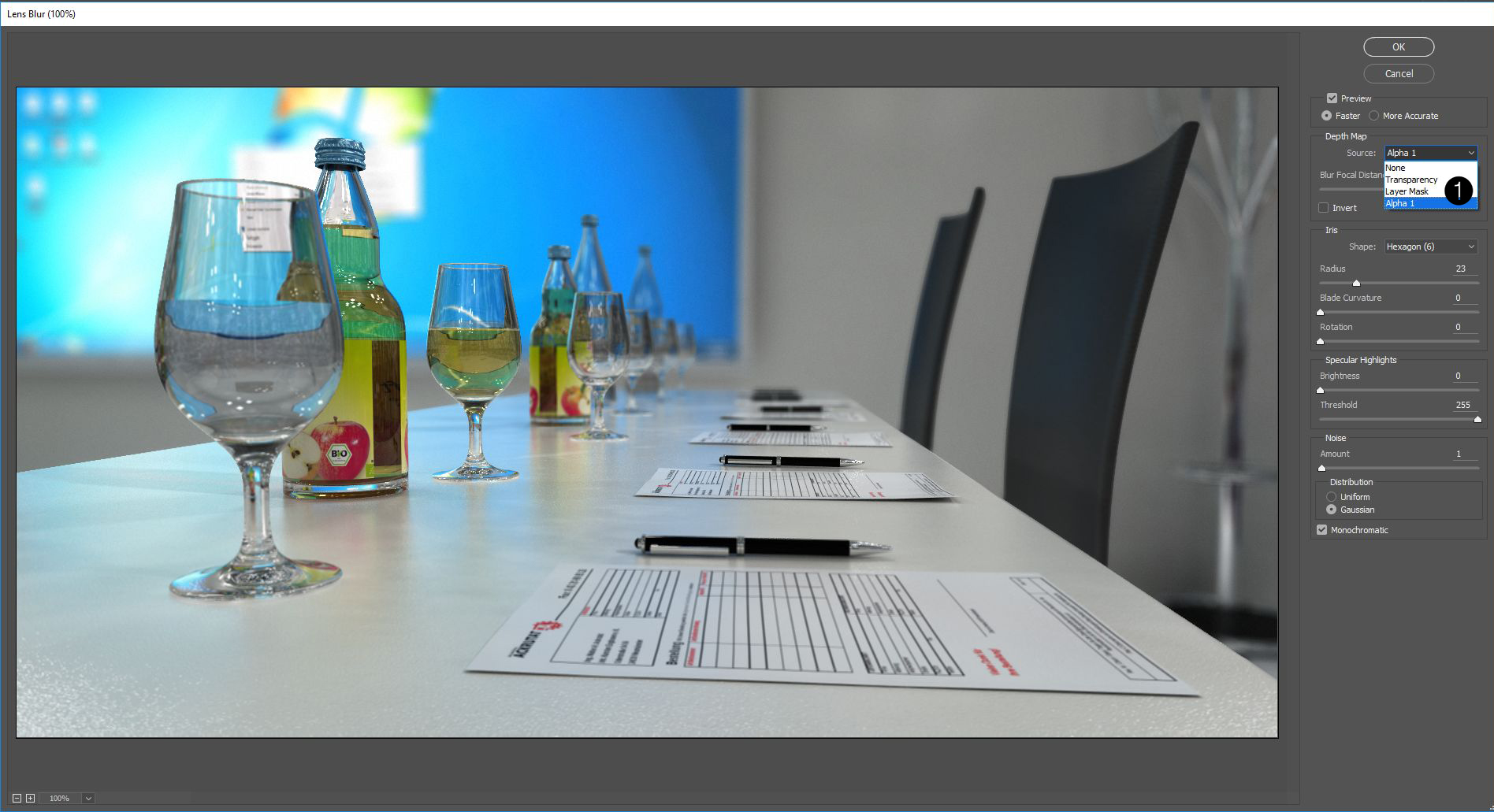 Now you can set the focus point by simply clicking somewhere. I decided to set it to the second drinking glass.
In most cases you will get some unwanted bokeh effects (Sharp edges although its blured, as you can see at the first drinking glass (1)). We will fix this afterwards. You can also adjust the strength of the blur by setting the Radius parameter now (2). 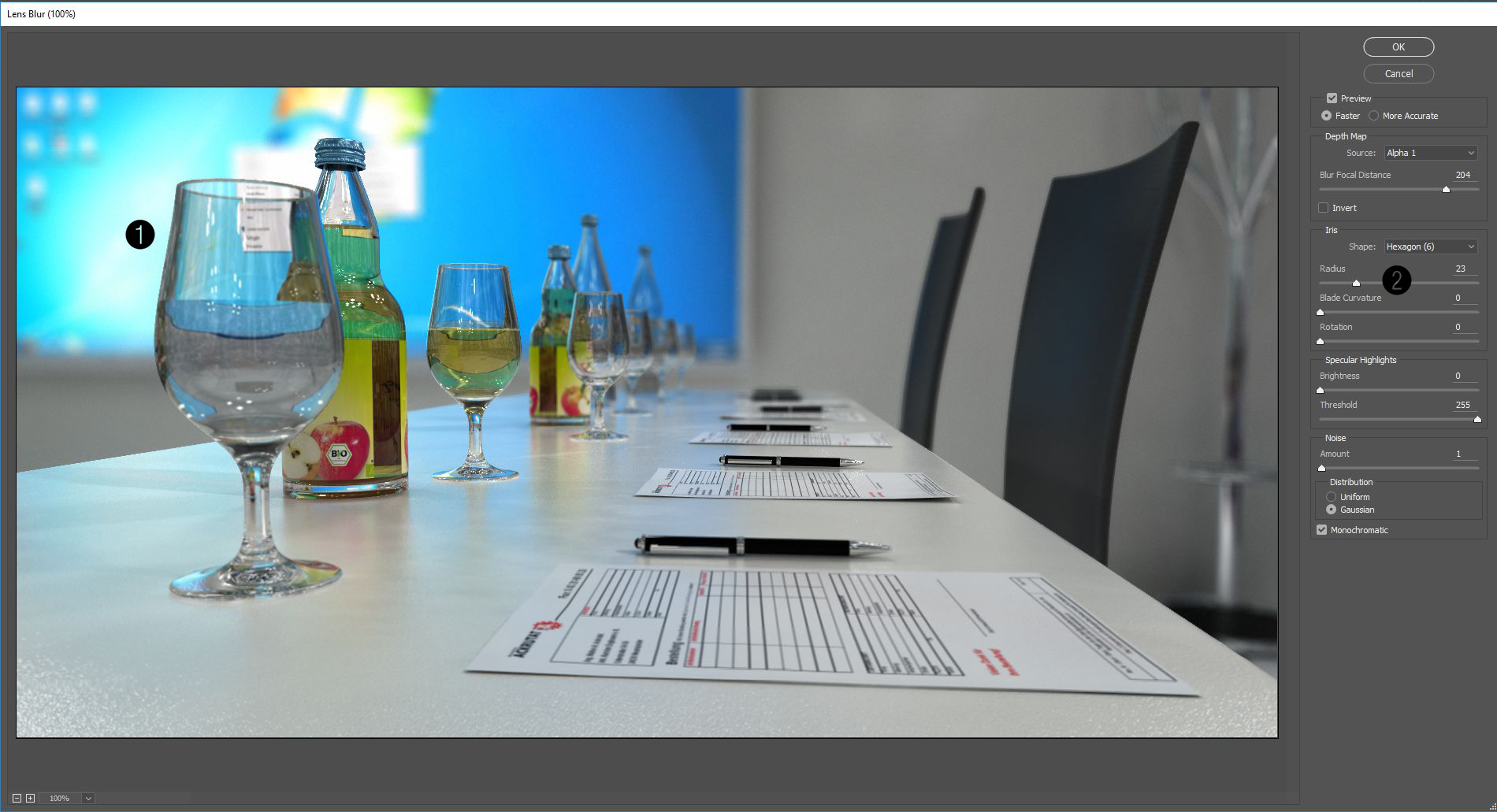 As just mentioned there are still sharp edges in the blurry areas. So we grab the blur tool to fix this.

Rightclick on the picture and set size and hardness to your choice.
Now you can kind of erase the unwanted sharpen parts blurry. Also use this tool to blur some details which you are not happy with or on which your rendering may be convicted to be not a real photo. But don’t exaggerate, it should still seem credible. Adjust the strength on the top for smoother editing. 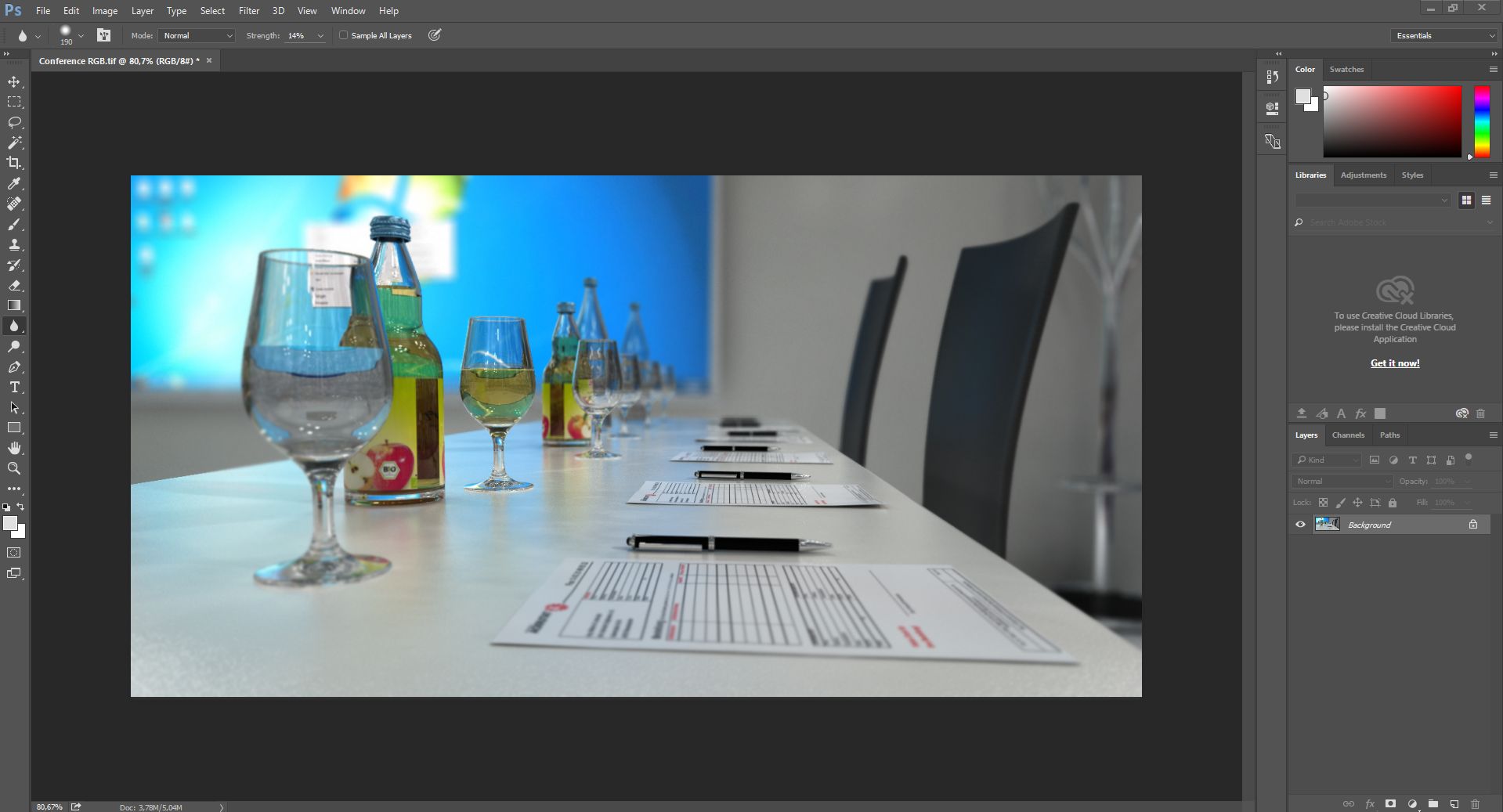 Now I want to add a vignette and some colorshifting effect, just as a real lens does. So go to Filter/ Lens Correction. Switch to “Custom”. You can play with the 3 faders of color shifting until you are happy with the result (1). Exeggarate first to get a sense of what the effect does. Below you can set up the vignette (2). We doent want a striking black frame, but a smooth darkening of the corners to lead the observers eye into the middle of the image. 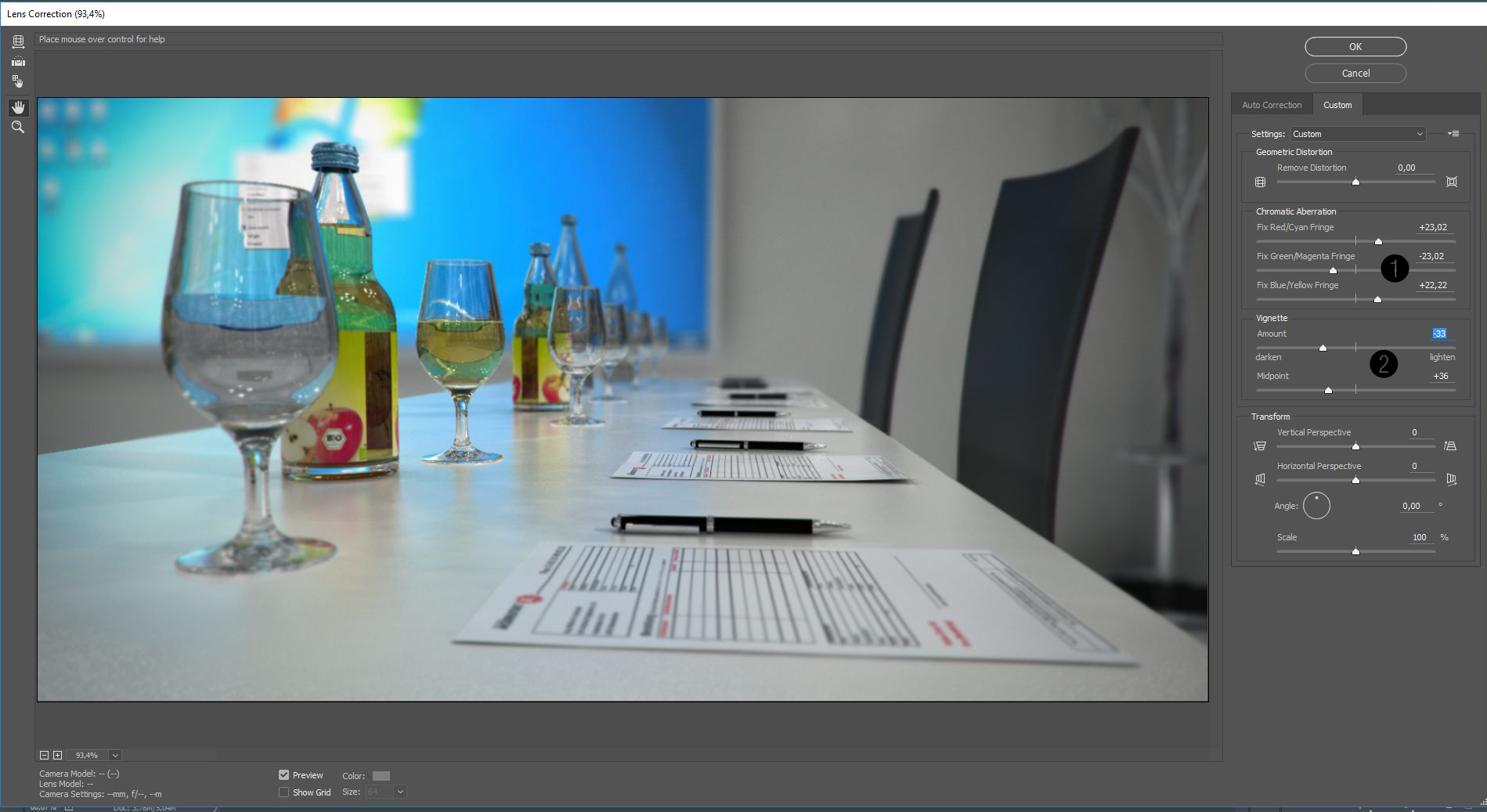 I recognize the image seems still a bit flat. So I go to Adjustments (1) and select Levels.
Try to find a good compromise of the left and the right arrow. Use the middle arrow to set the balance. 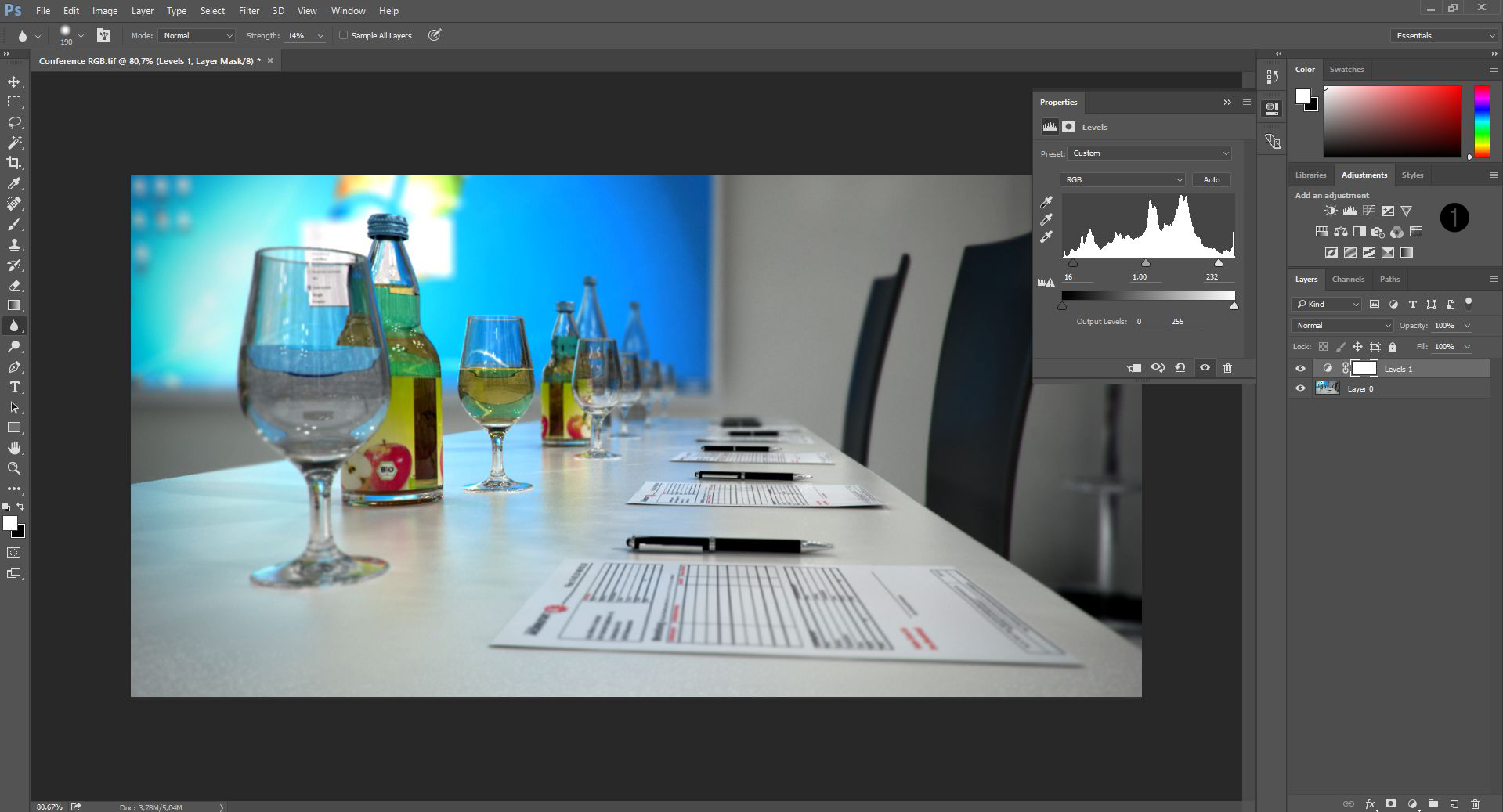 You can do some more adjustments to the image, but I am happy with my result now.
I hope you enjoyed my little tutorial to this scene. Stay tuned!
BK”

I’d like to say thanks to Benni for contributing to the content. I really like the way the final image looks, but I would have made one passage differently.

For example I wouldn’t use an “emissive sphere” for lighting, but just a dome light (it’s recommended) as emissive materials do not produce GI calculation and may produce some splotches. Apart from that, really good job bro and thanks for sharing!